Leave us a message

Leave us a message

Sort by:
Best sellers Relevance Name, A to Z Name, Z to A Price, low to high Price, high to low
Showing 1-1 of 1 item(s) 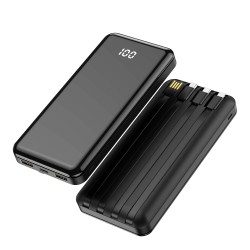 What is a power bank? A power bank is a mobile charger that can be charged in advance to charge phones, laptops and tablets at a later time. A power bank is really a gadget to charge electrical devices without the need for an electrical outlet. How do you charge a power bank? A power bank can be charged by plugging it into the wall socket. Most power banks are self-powered via USB. This means that the power bank, like many phones, ipads or GPS systems, can easily be connected via a USB charger. They can also be connected to a computer with a special cable to provide them with power. In addition to power banks, there are now also solar banks, which are charged by the solar panel that is integrated on the power bank. How does a power bank work? A power bank contains one or more Lithium Ion cells. These actually function in the same way as normal rechargeable batteries. They can therefore be charged via a USB connection or via an included adapter and / or cable.

By way of illustration: a power bank of 5600mAh is able to charge a modern smartphone two to four times.